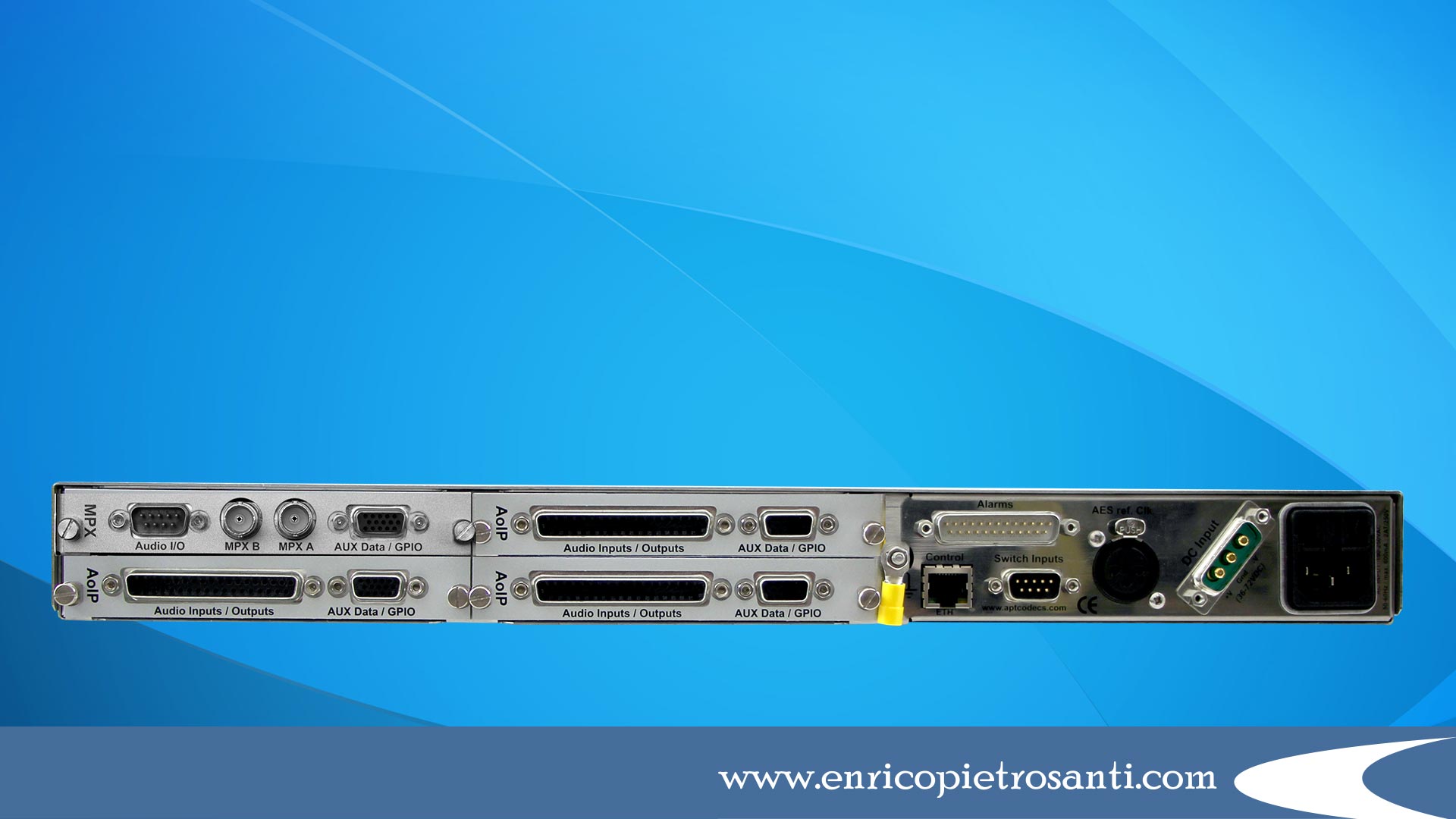 Why send MPX over IP?
The use of an MPX codec enables centralized signal processing; it encodes the output from the audio processor, stereo encoder and RDS encoder at a single location. The MPX signal is then distributed by an MPX codec to one or multiple locations over the IP network with no further processing required at the other sites. With no additional stereo encoder, RDS encoder or audio processors required throughout the distribution network, significant savings can be gained both in terms of capital outlay and from the operational savings on-site with less energy consumption, less cooling, less wiring and less space required.

There are 7 Reasons Why APT Codecs Perform Better…
Sending the MPX signal direct to the transmitter site offers many intrinsic benefits but not all MPX Codecs do the same job. The engineering know-how that has been invested in the APT MPXoIP solution has produced a solution that delivers unrivalled reliability, robustness and performance within the industry today… and here are 7 reasons why…

1) OMC Algorithm (Over Modulation Cancellation)
A unique feature of APT MPX Codecs is their ability to cancel out undesired peaks and troughs of the MPX signal to reliably prevent overmodulation, caused by dropped IP packets. Overmodulation causes disturbances in the adjacent channels of the FM band which can lead to regulatory fines or penalties and are therefore to be avoided.  APT MPX codecs deploy a ‘watchdog’ service which ensures that, should there be any distortion or corruption of the signal, it will not lead to overmodulation.

2) Bandwidth reduced MPXoIP option to 2.3MBits
In most applications, in addition to the audio program, only RDS data is transmitted. The RDS carrier is at 57kHz; however, the MPX signal can be up to 100kHz. APT codecs offer a Bandwidth Reduction option which allows you to cut the spectrum at 64kHz, leading to a significant saving of the bit rate in the IP network.

3) Unparalleled MPXoIP protection using SureStream
Just as SureStream Technology is very effective at protecting audio data from packet loss when transporting it over IP,  it also affords the same level of protection to the MPX Signal. With seamless delivery, SureStream eliminates the need to pay for for high-quality IP lines, enabling transmission over low-cost IP networks without any of the side-effects which occur with traditional FEC methods.

4) MPXoIP in Unicast, Multiple Unicast & Multicast
To fully exploit the advantages of MPX transmission, APT MPX codecs offers IP casting modes such as unicast, multiple unicast and multicast. This opens up the all the possibilities of point-to-multipoint distribution familiar to those transporting audio over IP to those transporting the MPX signal.

5) Hybrid topology available using Digital In with Analog Out
Increasingly central broadcast studios are converting to operate solely in the digital domain where the signals within are digital and the studio output MPX signal is also generated as a digital AES signal. As APT codecs can carry both analog and digtal MPX signals, an upgrade of your studio facilities does not mean that you also have to replace an analog transmitter. Supporting both formats enables the signal domain in the studio to be completely independent of the signal domain at the transmitter site. APT codecs can receive a digital MPX signal and play it as an analog signal at the transmitter (hybrid topology).

6) Low Latency MPXoIP Solution
APT codecs have long had a reputation for low latency transmission and MPXoIP transmission is no exception to this. In customer and inhouse testing, we have seen that, when tested alongside comparable solutions, APT codecs offer the lowest latency by a significant margin. The graph below shows the actual performance of the APT MPX Codec vs a leading competitor.

7) Cross talk figures maintained
When transporting an MPX signal, avoiding crosstalk attenuation is more critical than ever. To ensure that the required crosstalk values are achieved, APT codecs feature specially selected hardware to meet the requirement and preserve the high quality of the digital MPX signal right up to the analog transmitter.